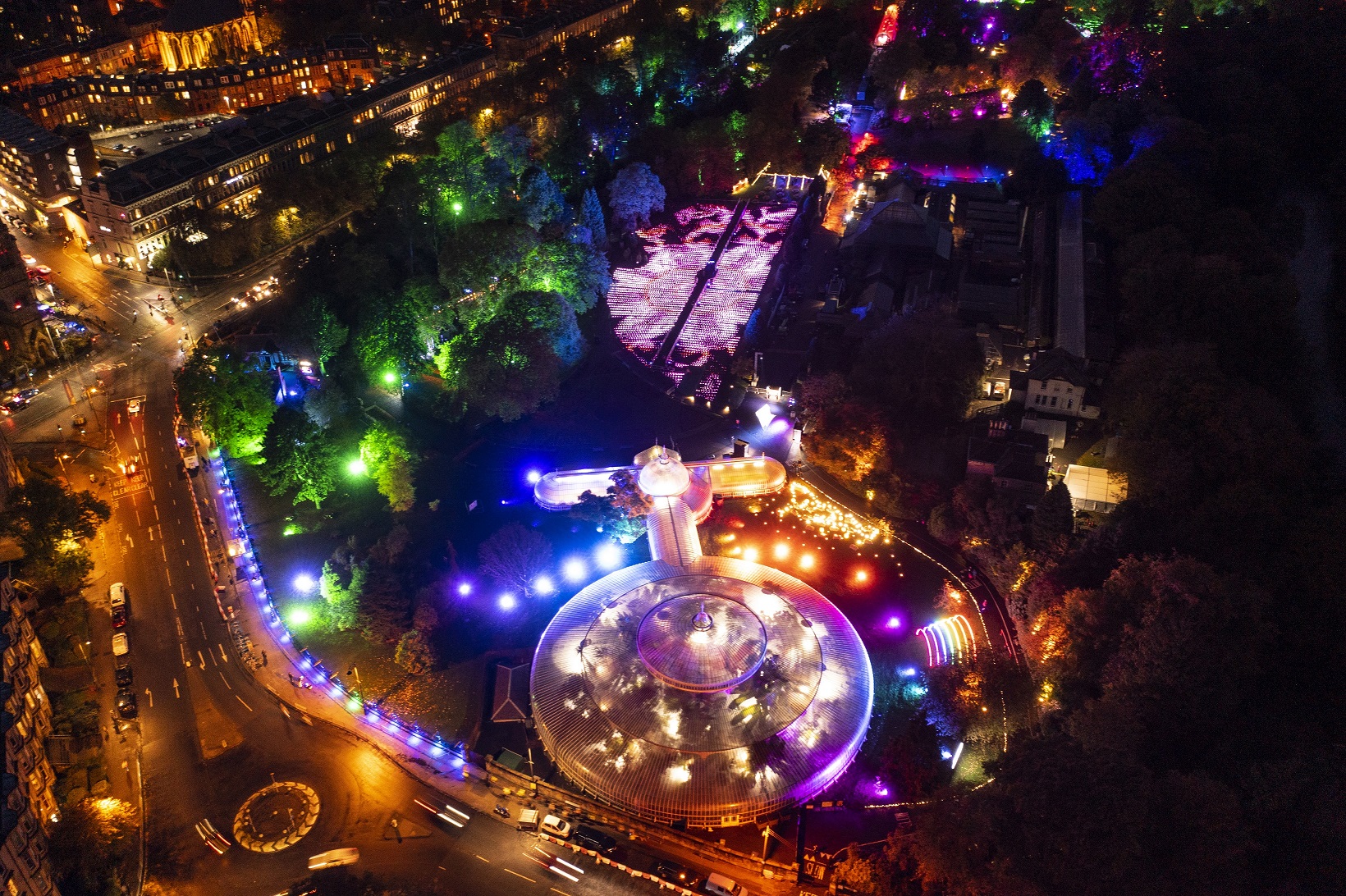 Good news as the long dark nights draw nearer. Our favourite Autumn and Winter events GlasGLOW and Elfingrove, are set to return to the West End. With a four million pound investment from the company behind the events Itison, they are sure to be bigger and better than ever.

GlasGLOW is the biggest sound and light show in Scotland, not to mention the biggest Halloween event in the UK. Now in it’s fifth year, the theme for this year’s GlasGLOW has just been announced and it’s bound to be a roaring success, if you’ll pardon the pun! THE LAND THAT TIME FORGOT will see the Botanics transformed into a prehistoric wonderland where dinosaurs roam wild. During the 60 minute adventure, visitors will encounter dig sites, volcanoes and giant spiders too. But not to worry, our favourite pumpkin patch is also returning to set the Botanics a-glow.

As Christmas approaches, Elfingrove will return to Kelvingrove Art Gallery & Museum, with the return of Scotland’s biggest bespoke ice rink, inspired by the ice rink at Rockefeller Centre in New York. The event whose inaugural outing was back in 2019 had an unwelcome hiatus due to the pandemic, but returned with a bang in 2021. The first outing of the clear-roofed ice rink designed by iSkate, the company behind Dancing on Ice, saw over 100,000 skaters visiting to skate under the stars.

Not only do these events bring a smile to visitors during the long winter months but they benefit the local economy enormously. As well as contributing an estimated 14 million pounds to the economy, a further estimated 6 million pounds is driven into the surrounding bars, restaurants, shops and hotels.  Ticket holders, either before or after the event, want to eat, drink and be merry during their visit to the West End. Not to mention the 300 jobs created during the events. There is also a very positive impact on the over 100 predominantly Scottish suppliers, local makers, artists and designers who are engaged for the events.

Itison CEO, and founder of GlasGLOW, Oli Norman said, ‘Over the past two years, the event sector has been decimated by Covid – now we’re facing soaring supply chain costs, the cost-of-living crisis and the steepest energy hikes we’ve seen in our lifetime. We firmly believe though that people need things to look forward to – the darker nights, cold weather and uncertain economic and political climate have a heavy impact on our emotional and mental well-being. These events light up our city and bring people together creating joyful experiences – making them all the more important.’

And as for this year’s GlasGLOW theme Oli said ‘…the idea came to me when I was on the Isle of Skye with family… I’m excited to bring both events back more spectacular than ever before.’

Itison has also put it’s money where it’s mouth is in terms of giving back to the community. For those who might not readily be able to attend the events, the Itison Pumpkin Fund, created in 2019, will also return for 2022 – donating 1000 free tickets to good causes around the city. Over the past few years, the company has donated thousands of free tickets to local schools, charities and community groups. A 16 seater mini-bus has been provided to Highpark Primary LCR in Ruchill. A further £15,000 was donated to creating a new sensory room, called The GLOW ROOM, at East Park in Maryhill, supporting kids with complex needs including autism. And for those children who may have additional and/or sensory needs, GLOW Passes will be available during GlasGLOW, which will allow access to an onsite quiet room and pre-event sensory guide, detailing the sights, sounds, smells and spaces the children can prepare to experience.

So thankfully, it looks like a winter of brightness awaits!

For more information and to watch a trailer for the big event visit – www.glasglow.com

Elfingrove will magically appear this Christmas. Details to follow…