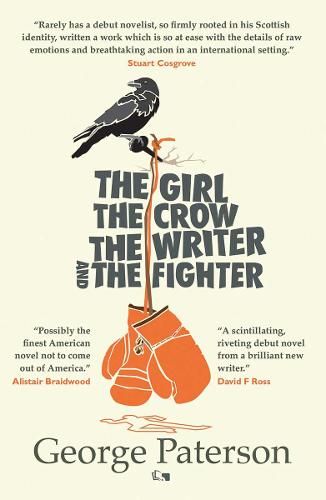 Author George Paterson is a writer, DJ and musician. His musical work can be found in independent short and feature length films.  Having lived in London, he returned to Scotland in 2017. He splits his time between his weekly radio show and his writing.  From features and reviews to screenplays, George has now added novelist to his list of achievements.  Here, he talks to Westender about his debut novel, The Girl, The Crow, The Writer and The Fighter and how cinema has influenced his writing.

The Man Behind the Front Cover

I can see from your bio that you are a man of many creative talents – writer, musician, DJ, screenplays.  What made you take the leap to writing a full-blown novel?
By the mid 2010s I’d started to become a little frustrated that my increasingly arcane narratives were no longer fitting comfortably into the five-minute songs that I’d been writing. When the group I fronted at the time, DMP, began to expand their official website, my guitarist and ‘sonic life partner’ Gordon Moir encouraged me to push on with the fictitious biographies that he and our audience seemed to be greatly enjoying.  From then I began to extend myself a little further with each piece, eventually jumping headlong into the writing, completing a couple of screenplays and a serialisation of our band’s, at times, hapless attempts to break into the music industry, titled ‘Everybody Wants To Rule The World’.  That lengthy and personally satisfying piece laid the foundations for ‘The Girl, The Crow…’

You are a Scot although you lived in London for a lengthy period.  But the novel is very much a love letter to American Crime Fiction.  You’re clearly a fan…
Very much so!  From childhood, I was a voracious reader.  Anything I could get my hands on I’d devour.  In my thirties though I’d been concentrating on my family and my career. So I guess I sort of lost my way a little with fiction, preferring to focus more on non-fiction, blogs etc.  By the time I hit forty, I’d started to dip my toes into fiction again with Thomas Harris’ ‘Hannibal’ and David Peace’s ‘The Damned United’ and ‘Red or Dead’. The latter of which had a huge impact on me and undoubtedly reignited my love for unique storytelling.

From then, not only have I immersed myself in the American crime fiction of Leonard, Lethem and Rudolph Fisher, I’ve rediscovered satirists I once loved. Like the playful James Thurber and the more challenging, dystopian musings of JG Ballard.  Basically, I’ve gone full circle and now I’m back to reading multiple books at once with my latest favourites being Jenni Fagan, David Keenan and Mariana Enriquez.

The Girl, the Crow, the Writer and the Fighter is your debut novel.  You wouldn’t know it! It intricately weaves 2 real life historical characters – playwright Henry Miller and fighter Sonny Liston – into a fictional story, yet there are elements of real events too. How on earth did you come up with such an incredible idea?

The seeds of ‘The Girl, The Crow, The Writer and The Fighter’ were sown by an article written by author/broadcaster Stuart Cosgrove in 2015.  He wrote of the infamous Heavyweight Champion Sonny Liston and of the warmth he experienced from the Scottish people when he briefly visited these shores in the early 1960’s.  I’d been messing around with a couple of ideas that had come to nothing, but this piece really resonated so I started to write a short story based on Cosgrove’s work.  Unfortunately, I couldn’t quite get the tone I was after, so I parked it and moved back to another thing I’d been playing around with; a story based on letters written in the 1970’s by controversial author Henry Miller to a young model he’d befriended in his dotage.

Like the Liston piece, I couldn’t quite get it to stand until I read another article, this time on ‘Highly Improbable Friendships’. One such friendship was that between playwright Samuel Beckett and wrestler/actor Andre the Giant! It turned out that Andre’s father had been a worker on Beckett’s French property and the young Andre would often catch a ride with Beckett into town where they seemingly bonded over their mutual appreciation for cricket! That’s when I started asking the question…what if Henry met Sonny?

The plot moves from 1930’s New York, to Paris, travelling forth to Corfu.  The detail in your writing shows an incredible amount of research has gone into the book.  Do you have an affinity with any of the settings or indeed the time periods the novel travels through?
I’m a true urbanite and am never happier than when I’m traipsing around cities that I know and love such as London, New York and Paris.  However, I’ve long held the belief that the scope of a writer’s imagination should never be limited by the parameters of their experience and although I’m intimately familiar with the cities, I’ve never been to Corfu, Maine or St Louis, all of which feature prominently in the book! That’s where the hours of research came in. As for the time periods, I have to admit that I’d have loved to have been a free man in post war Paris, like Henry and Sonny, listening out for the strains of gypsy guitar in the air.

I’m a huge fan of 1940s Film Noir and there are so many elements in your writing that remind me of cinematic imagery of that time.  Where have your influences for the novel come from?

I’m really glad you picked up on that, Tracy!  Whether it’s by accident or design, I tend to write my fiction as if I’m watching the story unfold on a screen. While the book’s narrative influences are derived from the works of Dashiell Hammett’s ‘The Maltese Falcon’ and Thomas Pynchon’s ‘Inherent Vice’, the dialogue of the piece is driven by my love of sharp, witty screenwriters such as Nora Ephron, William Goldman and Neil Simon.

The other “story” in the book, takes places in the 1980s in Maine; the 3rd character from the title, the Girl.  Do you want to tell our readers a little about May Morgenstern and how she is linked to the other characters in the book

May Morgenstern is the heart and soul of this story.  A young waitress in a Maine diner, May’s directionless life is turned upside down by the bequest of a series of letters, correspondence between her friend, a recently deceased customer of hers and someone who may or may not be notorious novelist, Henry Miller. The deeper into the letters she delves, the more complex her own life becomes. And with it, some very unexpected challenges.

The Crow… without giving too much away, how would you describe the 4th protagonist?

Malevolence and greed.  Should’ve been a politician.

‘Your‘ Henry Miller might be somewhat different from the historic figure.  A famous lothario we all know, but how did you come to write him as almost a Phillip Marlow come James Bond figure?

I’d have to blame the late American character actor, Fred Ward for that!  I had a vague but limited understanding of Miller and his works as an elder ‘proto-beat’ figure from books like ‘Tropic of Cancer.’ But it wasn’t until I’d seen the movie ‘Henry and June’ – which starred Ward as a very muscular version of Miller – that I’d started to develop a greater interest in him.

Using Arthur Hoyle’s excellent ‘The Unknown Henry Miller’ as the road map and Ward’s characterisation as my physical template, I decided to drop the latter’s Miller into scenarios that would force him to rely on his real life cunning, charm and instincts of survival. The deeper I ventured into the story, the more I found that both the fictitious and the true Miller were blending into this baffled but resilient anti-hero. One I hope the reader will root for, despite some of his more questionable behaviour!

The novel was published by Into Books, part of Into Creative.  You have a strong relationship with Into Creative.  Do you want to tell the readers a bit about Into Creative and how the publishing of the novel came about?

Into Creative is an independent multi-media company based in the West End. It’s run by a very inventive fellow named Stephen Cameron.  Its literary arm – Into Books – is a small, intimate imprint which only publishes books that the team are passionate about. I’ve known Stephen for a few years now and have been contributing reviews and articles to the Into website. Into have reciprocated by providing a playback space for my weekly Lost in Music radio broadcasts on 106.8 Cumbernauld FM.

On one of our regular walks around the West End, I let slip to Stephen that my debut novel was almost complete. Initially he was reluctant to take a look at it for fear that he’d have to disappoint a friend. I didn’t mind, I said. I wasn’t sure how to market the book to publishers and was just after some feedback. I’m a slow reader, he replied, so don’t expect a quick response. Fair enough I thought, handing him a draft copy. He sent me a message about three hours later with a picture of page seventy-two and the words…’We need to talk.’ From there, it’s been a non-stop adventure that Henry Miller and Sonny Liston would be proud of, culminating in the book’s recent shortlisting for Best Debut at the forthcoming Bloody Scotland festival.

The Girl, The Crow, The Writer and The Fighter is at its heart a murder mystery. But my goodness, there are so many twists along the way.  How would you describe the novel to the Westender readers?

A pacy, epistolary, ripping yarn, set over six decades and three continents, peppered with profanity, lashings of sex, drugs and Huey Lewis and the News. It also has a lot of heart. Suitable for readers of all ages!

The Girl, The Crow, The Writer and The Fighter is available now.